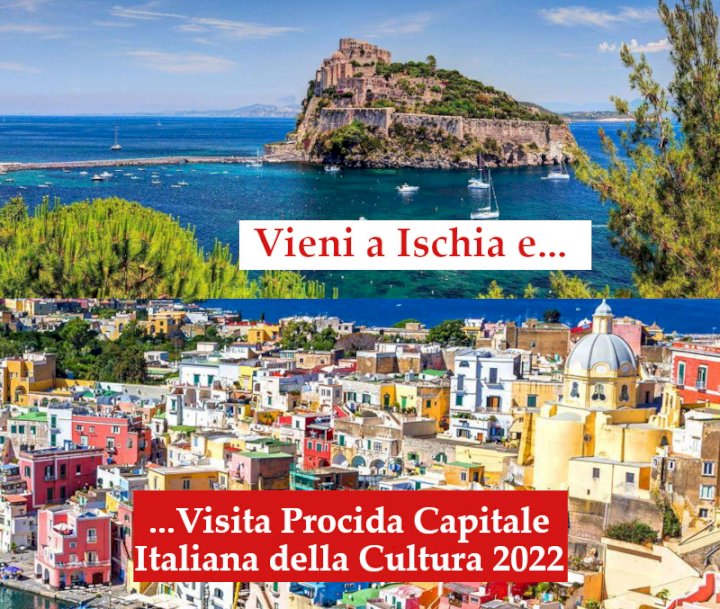 Well, coming to the Hotel Terme Oriente in Ischia, which is a few minutes walk from the port, you might be lucky enough to visit Procida.

You can’t miss this opportunity, because it’s really worth it. And I’ll explain why, talking a little about this little island that has been talked about all over the world.

Procida is the smallest of the islands in the Gulf of Naples, and was the first to be inhabited: from what has been learned from recent archaeological finds, the island of Vivara seems to have already been populated around the 16th – 15th century BC, presumably by Mycenaean colonists who chose it as a location for the manufacture of metals.

The crescent-shaped isletof Vivara undoubtedly recounts the origin of the island born to the sound of eruptions from seven craters. It is certainly the most intact together with a nature of holm oaks, downy oaks and scrub populated, during periods of migration, by different species of birds.

Procida is not only ancient history or legends, but it has also been a place of famous films and books: the places sublimated by Alphonse de Lamartine in the novel Graziella, by Elsa Morante in the masterpiece L’isola di Arturo and by Massimo Troisi in his latest film Il Postino. A tangle of arches, stairways and alleys that, in a nativity scene of volumes, rise steeply from the docks crowded with colorful goiters and fishermen at work among Neapolitan pots, nets and papers.

Each initiative will be the pretext to discover it, starting with the postcard scenery of the Marina Grande, better known to the islanders with the name of Sent’Co (from Santo Cattolico).

Here there are typical bars and restaurants that offer the best of Procidan cuisine based on stewed octopus, spaghetti with anchovies or sea urchins, wild vegetables, fish traps or fishing line, fried fish and the historic lemon salad with garlic, olive oil, salt, mint and chili pepper.

A breath away from the docking of tourist ferries and hydrofoils, the church of Santa Maria della Pietà and San Giovanni Battista, dating back to the first half of the 1600s. With a large churchyard, among the symbols of the seafaring tradition, it houses inside, especially on the main altar, a series of ex-votos that tell the great devotion of the Procidans.

To really realize how much fishermen, over the centuries, have painted this island inspired by the sea and its depths, it is necessary to visit the oldest village. Here time has no meaning and every glance is full of that Mediterranean magnetism capable of bewitching even Apple and Microsoft who, a few years ago, launched their smartphones and tablets using photographic glimpses of Corricella in advertising campaigns.

Legend has it that the pastel colors of the houses (pink, yellow, white, blue, orange) were used by local fishermen to recognize their homes from the sea. Therefore a consoling ploy, useful to appease the fears inherent in the difficult job of fishing, and yet very successful from an aesthetic point of view. It should not be surprising, therefore, the strict observance of the color plan drawn up by the municipal administration.

Another strong point of Corricella is the fact that it is completely pedestrian. A world apart, an oasis, a refuge from cars, motorcycles and scooters. Instead, Corricella can be reached on foot, at the end of a steep flight of steps with several bifurcations. Steps which, in turn, are located at the end of the downhill road that “runs” alongside the Sanctuary of Santa Maria delle Grazie, built in 1679, with five altars, floral stuccoes, 18th century Neapolitan school paintings, wooden furnishings inlaid.

In short, getting there on foot costs a bit of effort (there is always the alternative by sea) but, once you arrive in front of thisamphitheater on the sea, between pots and nets spread out in the sun, colorful houses and the tables of the various restaurants of the area, you will understand that it was worth it. Capirete che qui c’è l’essenza della mediterraneità.

You will understand that here is the essence of the Mediterranean. A short walk from our hotel to the port, and you will be lucky enough to visit the Capital of Culture 2022.